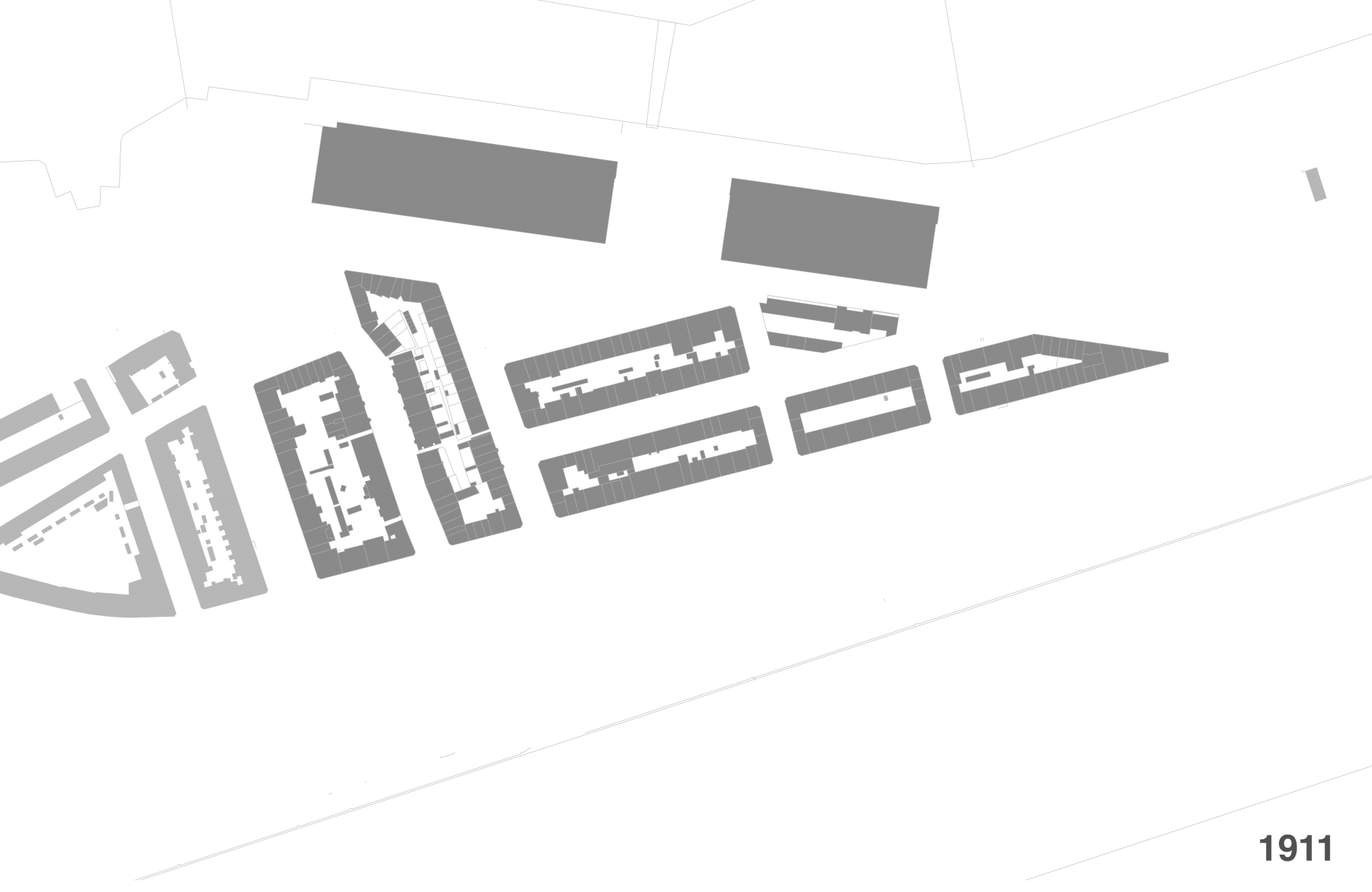 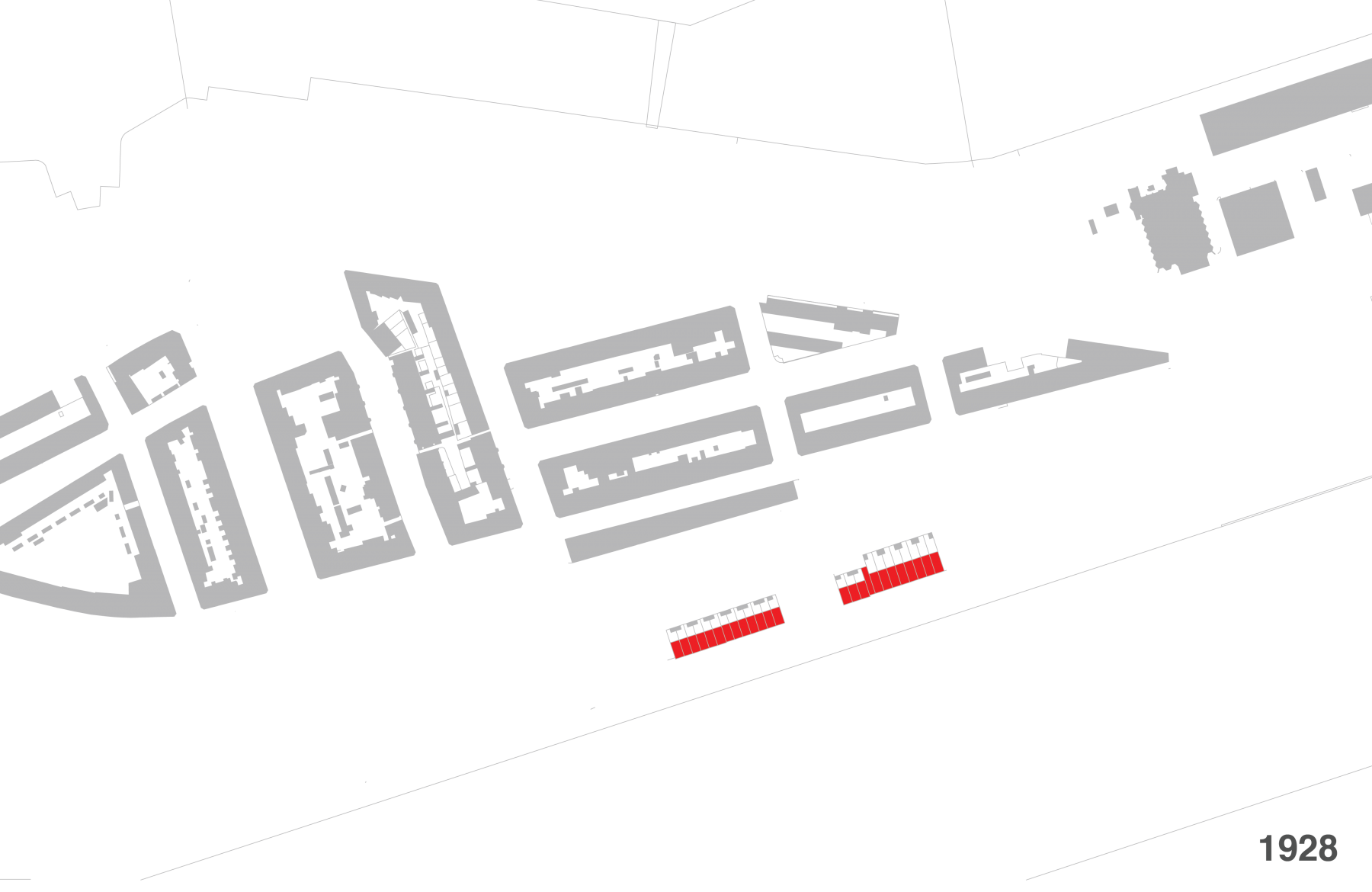 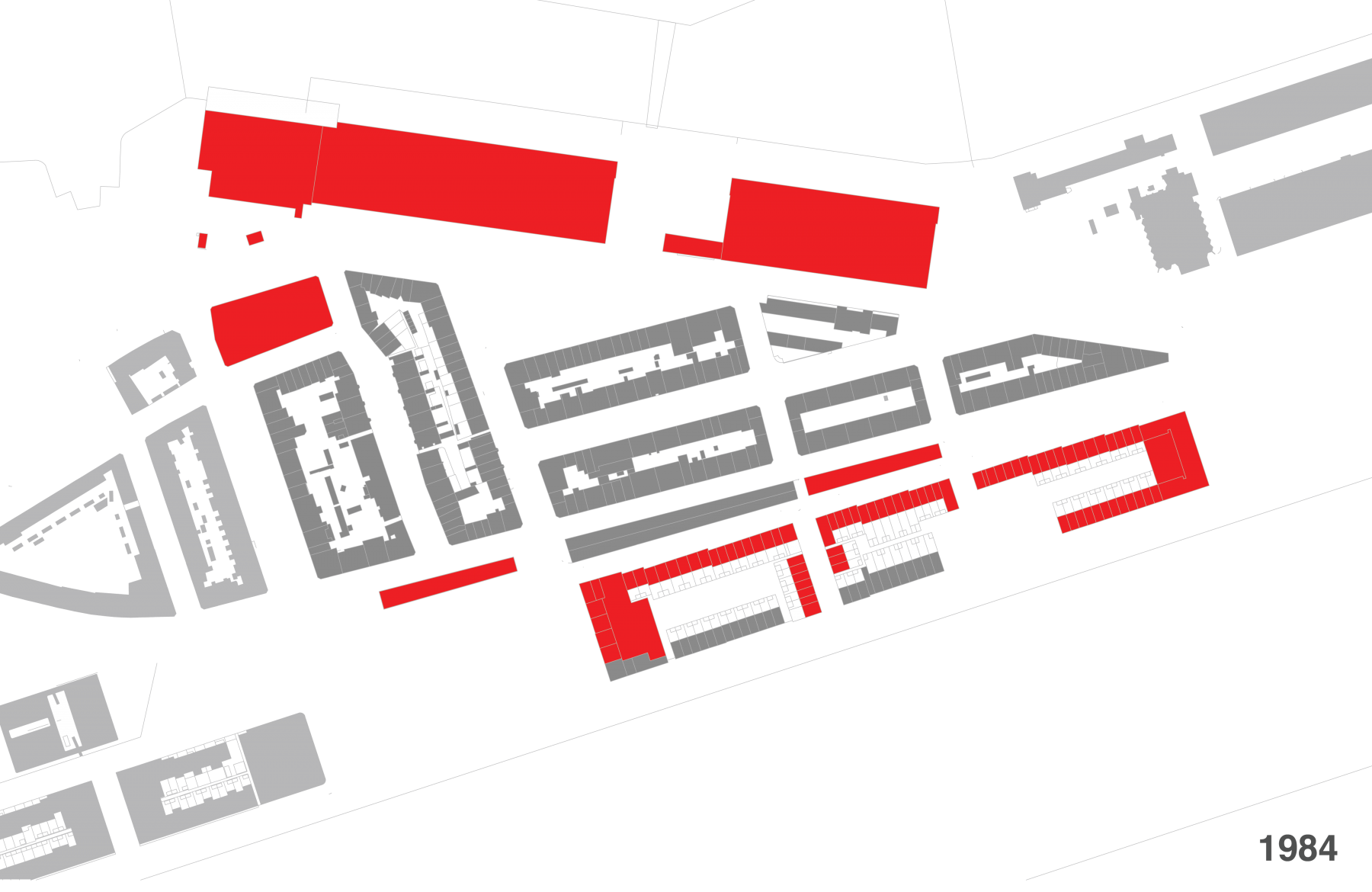 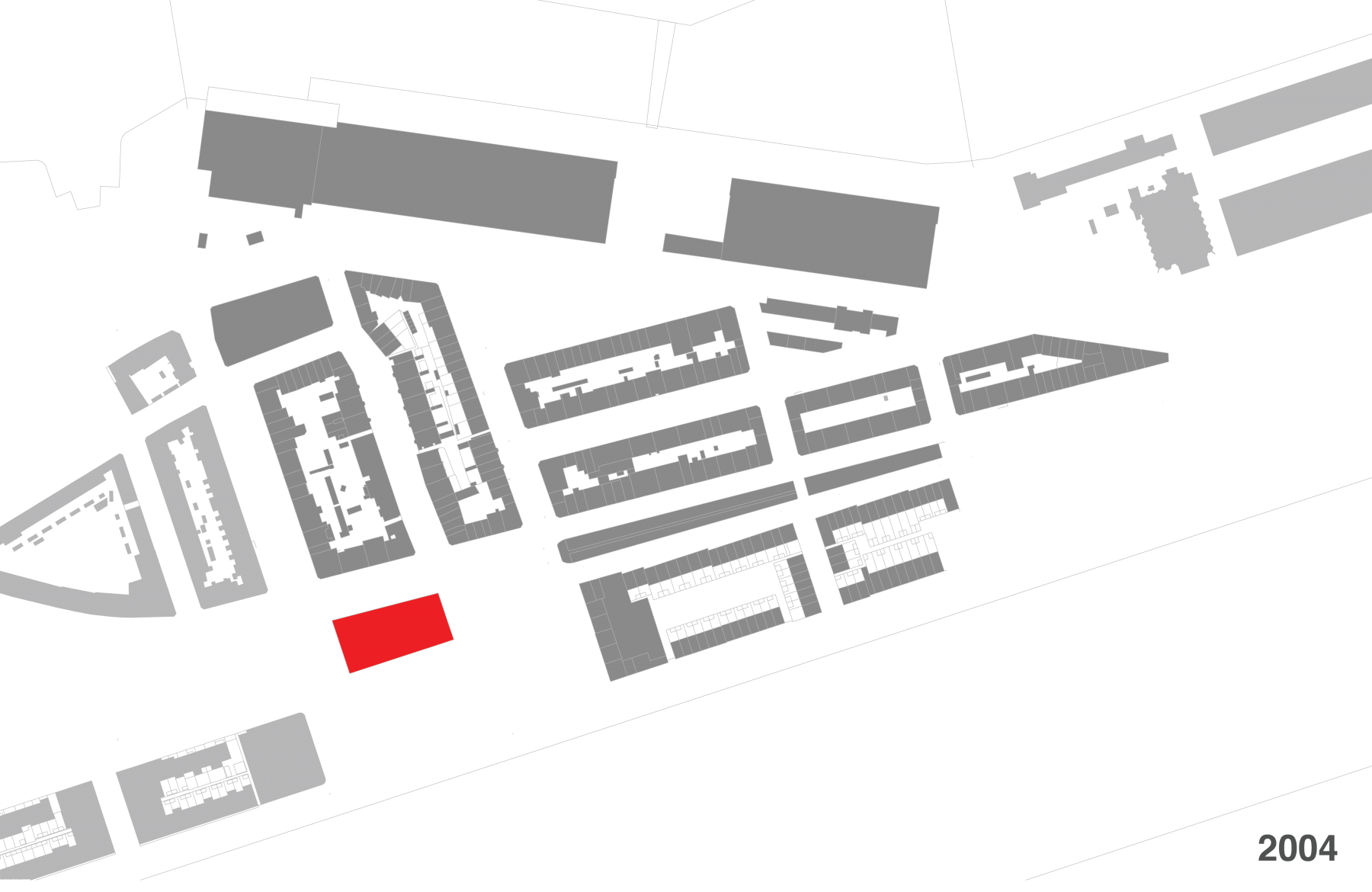 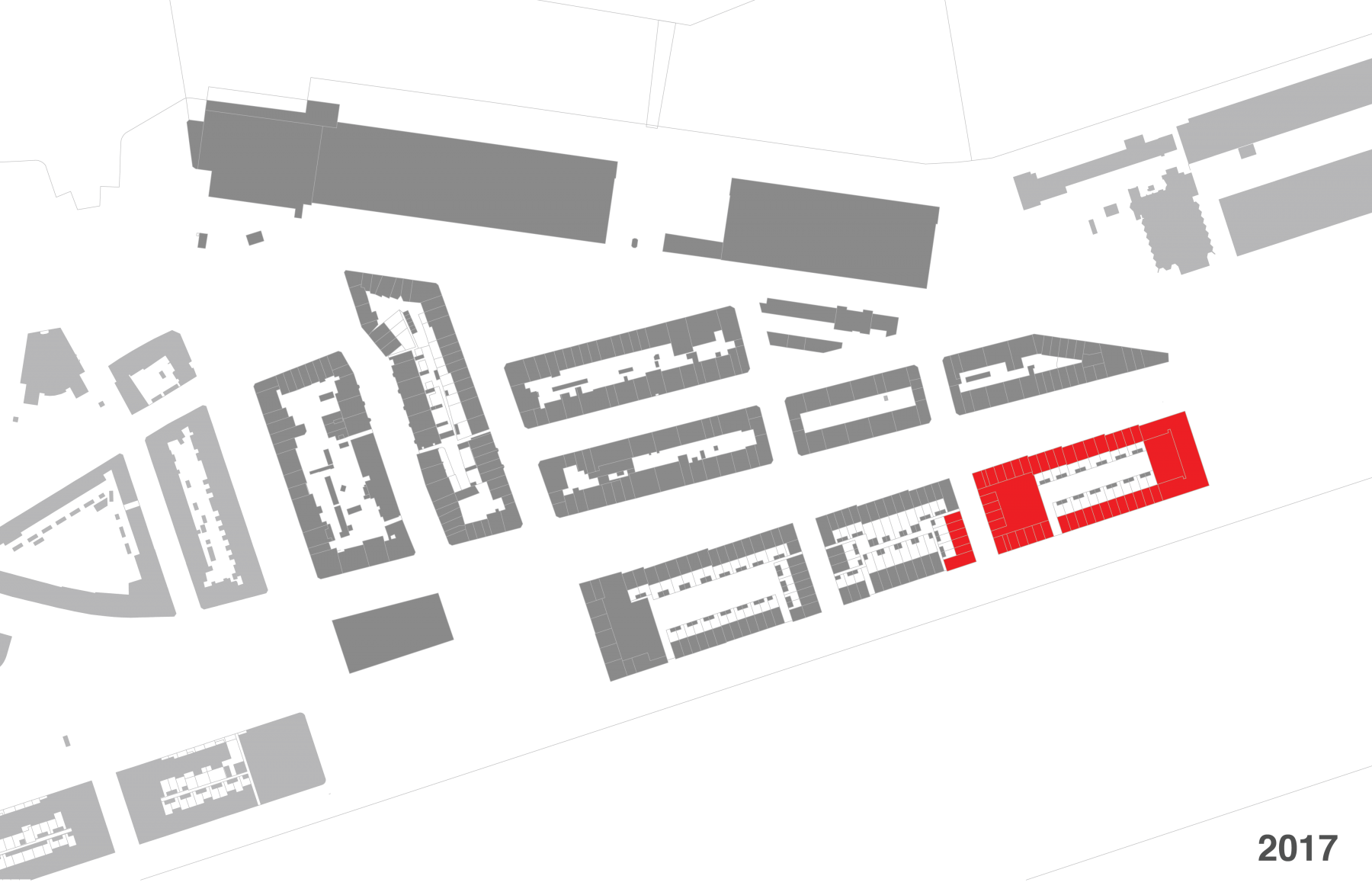 Once Rotterdam’s sailor’s quarter, Chinatown, and whore community, now claims to be hot and promising. Katendrecht is a constantly changing neighbourhood located South of Rotterdam’s ‘city triangle’ (stadsdriehoek) surrounded by Maashaven and Rijnhaven. The historical genesis comprises the basis of the demographic, typological and morphological characteristics in the past and in the future in this area. These aspects will therefore be investigated chronologically in the course of this report.

The first words spoken about the existence of Katendrecht date back to 1199. At the time, the area belonged to the noblemen. Slowly, parts of Katendrecht are being sold off to Rotterdam until they own the complete area in 1766 [1]. All in all, Katendrecht was a charming little village surrounded by greenery in the nineteenth century. Several noble families had their second houses in the area. At the end of the nineteenth century the first and second harbour of Katendrecht are excavated. One can even find evidence of texts talking about a third harbour, but researchers believe this to be a cover for the ambitious plans of the Maashaven. With the growth of the harbours in mind the former director of Gemeentewerken Rotterdam ir. G.J. de Jongh developed plans for the canals Rijnhaven and Maashaven that would cause the end of the thriving Katendrecht. The small peninsula now houses part of the neighbourhood, not surrounded by green anymore, but by the harbours, warehouses, shipping- and rail yards. Of the original Katendrecht is little left, only the Hilledijk and the Rechthuislaan recall the once charming little village located there [2].

Major unemployment arose under the local farmers, because of the crisis in the farming industry. The harbour, on the other hand, flourished. However, during the summer of 1911 the sailors decided they were not given the rights they should be given and went to strike. As an answer to the strikes Lloyd, the shipping company of Rotterdam, took in over a hundred Chinese employees from England. This can be seen as the main reason for the current multicultural diversity of the inhabitants in the neighbourhood [3]. The employees settled in Katendrecht with its low rental prices. This would be the beginning of the upcoming growth of Katendrecht as Chinatown. By the time of 1922 over 15 boarding-houses existed in the Delistraat and surrounding areas. Supermarkets, gamble and opium venues and other entertainment facilities could be found together with this kind of houses. In the 1930’s a crisis hit the country and made many of the Chinese population unemployed. When the shipping industry started to rise again at the end of the thirties most of them had already left the country. This was partly due to the actions of the government that shipped the individuals that were not suited to work in the industry anymore back to Hong Kong [4]. Nonetheless, what is left of this period is the streetscape of the Delistraat. Small businesses, restaurants and shops that caused the activity and liveliness in the area remain located around the Deliplein till today. Apart from this, also the shipping warehouses at the North of the fragment still remind of that time.

Even though the Zandbuurt, the notorious part of Rotterdam for entertainment still existed at the start of the twentieth century, Katendrecht was rising in popularity. Before World War II the prostitutes could usually find their customers somewhere around the Delistraat [5]. During the war, soldiers of the German army were prohibited to visit the peninsula. It was believed that venereal diseases would affect the racial purity of the soldiers. This would offer the area the opportunity to become the safe haven of Rotterdam, where jazz music could still be played and where shelter could be provided for people that went into hiding [6]. The area flourished after the war and this would not go unnoticed by investors. Around the end of the seventies over a hundred brothels could be found on the peninsula with almost 400 prostitutes.

The ambiance of the area changed majorly, and the population started to oppose. Several violent uprisings occurred. As a result, the municipality of Rotterdam agreed to not only start city renovation in Katendrecht, but at the same time eliminate the prostitution. From 1975 till 1990 over 900 houses and commercial buildings have been renovated which lead to a huge transformation of the area [7].

A new coalition in the government stressed the problems of urban renewal on the map. With a new majority in the municipality of Rotterdam for the PvdA the city renewal (stadsvernieuwing), already mentioned above, or later called classical city renewal has been set in motion by Van der Ploeg. With the slogan ‘Building for the Neighbourhood’ (Bouwen voor de buurt), the plan tries to acknowledge the characteristics of the different neighbourhoods. This implies that the existing allotment is preserved, and a preference is given for renovation, affordable renting and social housing. With the help of both the inhabitants and the civil servants projects are started.

After the period of revitalisation, Katendrecht remained somewhat desolate as people were still cautious to choose the neighbourhood as a place to live. Businesses abandoned the area and houses were left empty. These places were filled by people from the lower classes due to which the area coped with the menace of becoming a slum. Later, one conceded that the desire for social housing indeed had not resulted in exciting architecture and did not solve the problems for the reallocation of the former harbour areas, like Katendrecht. Moreover, the renovation of the existing housing with plastered facades, new window frames and heightening and flattening of the roofs has led to a demolish of the qualities of nineteenth century architecture [8].

At the beginning of the new century it was time for change and a new plan without the PvdA, but with Leefbaar Rotterdam as driving force introduced the renovation and construction of new houses and the creation of new facilities. In the renewal more emphasis is put on a diversity of incomes in the neighbourhood. Moreover, there is more attention for safety and maintenance [9]. The goal was to promote Katendrecht as a popular place to be and attract new and younger people. In contradiction to the past, Katendrecht might be one of the safest neighbourhoods in Rotterdam nowadays and a large shift in the age of the inhabitants can already be seen [10]. Currently, the housing supply still mainly consists of cheaper rental houses, however the development of more expensive residences, like the luxurious Fenixlofts, has to entice the upper class to join the area as well [11].

When looking at the morphological aspects of the city fragment, it can be concluded that the building blocks are mostly closed blocks with either a semi-private or private space in the middle. An exception are the large industrial halls at the quay at the north of Katendrecht which nowadays fulfil all kinds of functions from stores to restaurants and little businesses. The story height of the structures ranges from three to ten floors however the latter only occurs at two relatively small locations at the northern side of the area. What strikes are the differences in building forms and styles in the neighbourhood. This can already be seen in one single block like with the one along the Delistraat and the Atjehstraat where big contrasts can be identified between both sides. The assets at the Delistraat belonged to different private owners who collaboratively agreed for renovation during the masterplan [12]. While maintaining one style over the length of the facade, different roofs and details have been applied which represents the diversity of owners of the block.

To the contrary, the houses at the Atjehstraat are controlled by a housing corporation and have been renovated differently during the city renewal. An outstanding plinth in which the communal entrances can be distinguished has been realized and the roofs have been flattened.

Furthermore, the three building blocks south of the Brede Hilledijk are newly built in a quite different style [13]. These recent blocks show repetition and form a strong unity as a juxtaposition to the existing building blocks that have been constructed dwelling after dwelling.

All of the events described above resulted in a diverse demographic situation in Katendrecht. Presently the peninsula is home to 4755 people of which the largest group (41,5%) lives alone. Almost one fifth of households comprises a married couple with children and therefore relatively many young folks (0-15 year) live in the area compared to other parts of Rotterdam [14]. This rejuvenation of the area and the new starters that have been attracted is mainly due to the last renovations and the changes made to the area in the masterplan.

Taking a closer look to the ethnicities of Katendrecht, it can be seen that even though almost half of the inhabitants is Dutch (47,3%), the ethnicities vary widely as can be linked back to past events. As can be seen later in the analysis, there is a reasonable group of Surinam and Antillean people present in Katendrecht. However, what stands out most is the faction of other non-western immigrants which is considerably higher than in Rotterdam as a whole. Assumably, the Chinese accumulation can be an explanation for this. Although many Orientals were shipped out of the country, some have married Dutch citizens or remained in the region [15]. Furthermore, an interesting observation can be made on the financial situation of the inhabitants of Katendrecht. Despite the flourishing periods and businesses, the profits remained with a small group of businessmen. The real citizen of Katendrecht could enjoy the vitality of the area but would not become rich. When regarding the present statistics, it can be concluded that largest part of the neighbourhood belongs to the group with a relatively low income in contrast to the rich Kop van Zuid to which the area is connected [16]. The current housing supply supports this, as cheaper rental houses attend the neighbourhood. However, as mentioned before attempts are made to change this situation by attracting new starters and wealthier people to the area.

To conclude, what stands out when analysing the city fragment of Katendrecht is the turbulent past of the area. The neighbourhood has known many ups and downs that resulted in large shifts of people and businesses over time. Consequently, Katendrecht has emerged as a multi-cultural community with inhabitants from different backgrounds. During the revitalisation large part of the buildings have been renovated or rebuilt to improve the status of the neighbourhood and attract new people. At the moment, this process is still ongoing with the remodelling of the Fenix storehouses and built of houses along the Brede Hilledijk. The outcome is a diversified area with buildings related both to the prominent past and the planned future.